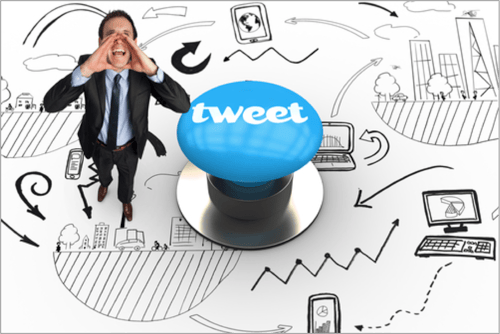 Although most U.S. nonprofits and charitable organizations are actively using Twitter (86 percent according to a study by the University of Massachusetts Dartmouth Center for Marketing Research), CEOs remain slow in their Twitter adoption.

A recent Weber Shandwick study shows that only 10 percent of CEOs running the top 50 companies on Fortune’s 2014 Global 500 rankings list are using Twitter. The same study cited Twitter and LinkedIn as the two most common social platforms used by CEOs.

As Twitter continues to evolve as one of today's fastest growing social media networks—with more than 316 million active subscribers—nonprofit CEOs have an opportunity to stand out among their peers and get ahead of the curve by embracing newer business communication tools like Twitter. In this blog post, we’ve outlined three reasons why your nonprofit CEO should be tweeting, as well as three caveats to consider.

What better person in the organization than the CEO to lead the charge by using his/her voice on social media to drive the nonprofit’s mission?

A tweeting CEO is expected to be a brand ambassador (yet still a real person) who posts consistently and doesn’t echo the company’s marketing or PR pitches, but rather speaks passionately about the brand’s mission, values, and culture. When a nonprofit CEO establishes a Twitter presence, he/she essentially becomes part of the organization’s brand experience by reinforcing the brand promise to all stakeholders.

“Thought leadership is simply about becoming an authority on relevant topics by delivering the answers to the biggest questions on the minds of your target audience?” - Michael Brenner (@BrennerMichael)

Like CEOs for any other business, nonprofit CEOs are using Twitter to position themselves as thought leaders. They’re not only representing their cause area, but are also actively engaging in industry conversations and serving as a resource of knowledge and information for both peers and constituents. To effectively build credibility, influence, and rapport on Twitter, CEOs should be authentic and approachable. In other words, they should put a human face and voice to the nonprofit’s leadership.

How many communication vehicles allow audiences to engage with the top leadership of an organization via one-to-one conversations? This is kind of a big deal.

Twitter is considered the “conversation” social media platform because it allows individuals and brands to engage in real-time, two-way, topical conversations (via short snippets of online dialogue) to build and maintain relationships. CEOs can leverage Twitter as a cost-effective way to build meaningful relationships with the nonprofit’s audiences including donors, members, advocates, volunteers, partners, press, industry peers, and employees.

Sounds great. But what are the caveats?

The decision to enter the Twittersphere is not one to be taken lightly. In the age of social media, CEOs are pressured to come across as transparent, real, and relatable. Spontaneous, unscripted tweets can quickly spread virally—a potential risk for CEOs and their nonprofit brands. Here are some considerations.

1. CEOs must be mindful to not overshare on Twitter.

This rule applies to all social media platforms, but Twitter can be especially risky due to its immediacy and its in-the-moment nature. While nonprofit CEOs aren’t encumbered by SEC restrictions like CEOs for public companies, they should nevertheless steer clear of controversial topics that could damage the brand’s reputation. Fortunately most CEOs are highly experienced with using caution when speaking in public forums. They should practice the same level of thoughtfulness and restraint when conversing on Twitter.

As marketers, we are fully aware of the time commitment involved with planning, drafting, and delivering relevant, consistent, timely tweets. CEOs who recognize the value of social media and the benefits of active Twitter engagement are more likely to devote some time in their day to tweeting. Once your CEO gets the hang of Twitter, they’ll grow to appreciate the community interaction and look forward to regular engagement.

Before your CEO opens a Twitter account, make sure you know which platforms your audience is using. If you’ve created audience personas for your nonprofit, you already know your audience's preferred social media networks. If you haven’t created personas yet, consider doing so to gain a deeper understanding of your audience's online behavior before your CEO puts effort into a platform that won’t yield a positive ROI for his/her time spent. As you develop your social media strategy, determine whether or not Twitter presents an opportunity to engage with a brand new audience.

In our next post, we’ll provide examples of nonprofit CEOs that are tweeting effectively.

Download our free ebook to create audience personas and generate more leads for your nonprofit.