Following up on our last post, “To Tweet Or Not To Tweet: That Is The Question For Nonprofit CEOs”, this post recognizes '5 Nonprofit CEOs Who Are Using Twitter Effectively' while representing themselves and their organizations as brand ambassadors, as thought leaders, and as real, authentic people.

Scott Harrison is the founder and CEO of charity: water. With more than 77 thousand followers, Harrison brings his own unique identity to Twitter. His feed is active and highly engaging with tweets that run the gamut from clean water advocacy to pledge campaigns to personal family photos to book recommendations to sports team commentary. Harrison is clearly adept at making others feel at ease in his presence, and his Twitter feed is no exception. He recently leveraged his 40th birthday to galvanize support for clean water in 40 Ethiopian villages. 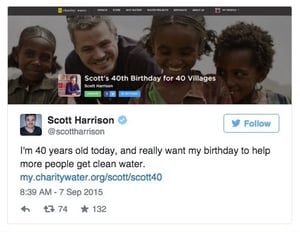 As president & CEO for Save the Children, Carolyn Miles is constantly on the move championing children’s rights around the world. She frequently tweets from events and crisis locations, sharing insights and images of children affected by adverse conditions, as well as those that have been helped. Miles’ tweets are typically inspirational and serious in nature. However, she does occasionally show her Twitter followers the fun side of her personality. 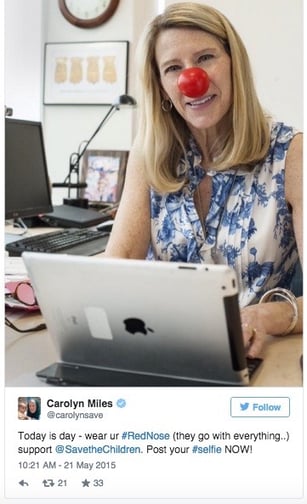 Brian Gallagher, president and CEO of United Way, uses his Twitter feed to share his leadership vision, to speak directly to peers and stakeholders, and to correspond with media. While he’s less likely to bring his followers into his personal interests than some of the other CEOs on this list, Gallagher is skilled at using Twitter to coalesce regional United Way teams and draw attention to the organization’s mission.

JoAnn Jenkins is AARPs CEO. Jenkins' Twitter feed mostly consists of her advocating on behalf of constituents, interacting with congressional leaders on Capitol Hill, and attending AARP sponsored events. Jenkins also tweets about research and offers thoughtful insights on aging, sometimes including links to her AARP blog posts. And every now and then, followers can catch a glimpse of her mixing it up with celebrities at fundraising galas. 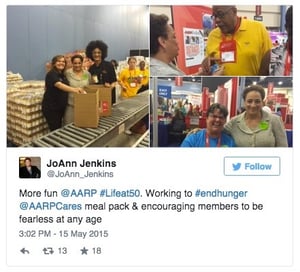 Jacob Harold, social change strategist and CEO at GuideStar USA, is known for tweeting inspirational, thought-provoking, and occasionally funny quotes—some original, some borrowed. Harold’s Twitter feed can best be described as both approachable and intriguing. When not tweeting quotes or sharing philanthropy news and insights, he often shares interesting images including artistic photography, data charts/graphs, street murals, and adorable pictures of his newborn son.

Download our free ebook to create audience personas and generate more leads for your nonprofit.